As part of its ongoing partnership with Big Brothers Big Sisters of the Bay Area (BBBSBA), every year, Northern California Student Corps chapters present a check as a donation to BBBSBA. This year was no different. On Saturday, August 13, a number of Fremont chapter members showed up at BBBSBA’s annual picnic, held at Quarry Lakes Regional Park this year. The picnic celebrates the successes of Big-Little relationships, both new and established.

Students were tasked with running activity stations, such as arts and crafts and gift distribution, along with making sure people had a good time in general. The frisbee painting station in particular saw great interest from dozens of people. At the end of the day, over 40 frisbees, each with dramatic and unique designs, were given out to Big-Little pairs. Student Corps looks forward to the partnership’s future!

Since the start of the pandemic, education has become one of the foremost challenges for educators and students alike. Over 25 Northern California Student Corps volunteers made their mark by working with the Resource Area for Teaching (RAFT) once each in April and June 2022. RAFT prides itself on being a resource hub for STEAM educators, featuring affordable recycled supplies, project ideas and workshops for educators, and countless project kits that promote hands-on learning.

On April 16th, 2022, eight students and parents gathered in a limited-capacity environment to sort and assemble over 1400 STEAM education kits. The kits constituted RAFT’s first-ever project set outside of the San Francisco Bay Area, as they were due to be sent to Washington D.C. Students and parents alike left RAFT feeling a sense of achievement after playing a key role in the milestone.

Two months later, on June 25, twenty students again gathered at RAFT to sort and pack various just-delivered supplies. Three hours of hard work allowed the packed supplies to become integral components of over 100,000 kits to be sold and distributed throughout communities.

Both events addressed the needs of numerous schools and communities and brought attention to an oft-overlooked issue, but perhaps just as importantly, both events proved to be great opportunities for forming relationships between and among students and parents.

On September 18th, 2021, several Student Corps members from Valley Christian High School gathered at Hellyer County Park for California Coastal Cleanup Day. The park runs along a river, and we split into two groups in order to cover both the north and south sides. We filled several large bags with trash, covering the area from the river all the way to the curbside. Passing drivers waved at us and thanked us through their car windows. We found many odd pieces of “trash,” such as a heavy wheel and various clothing items. One volunteer almost added a large rag to the trash bag before noticing a lizard hidden in the folds. Two volunteers even discovered a gun hidden in the grass! In fact, law enforcement officials and park rangers had been searching for this particular gun for a long time. Although unplanned, the find proved to be crucial in an investigation. Volunteers left feeling satisfied with their efforts while recalling the interesting events that had occurred. This volunteer experience was unlike any other before! 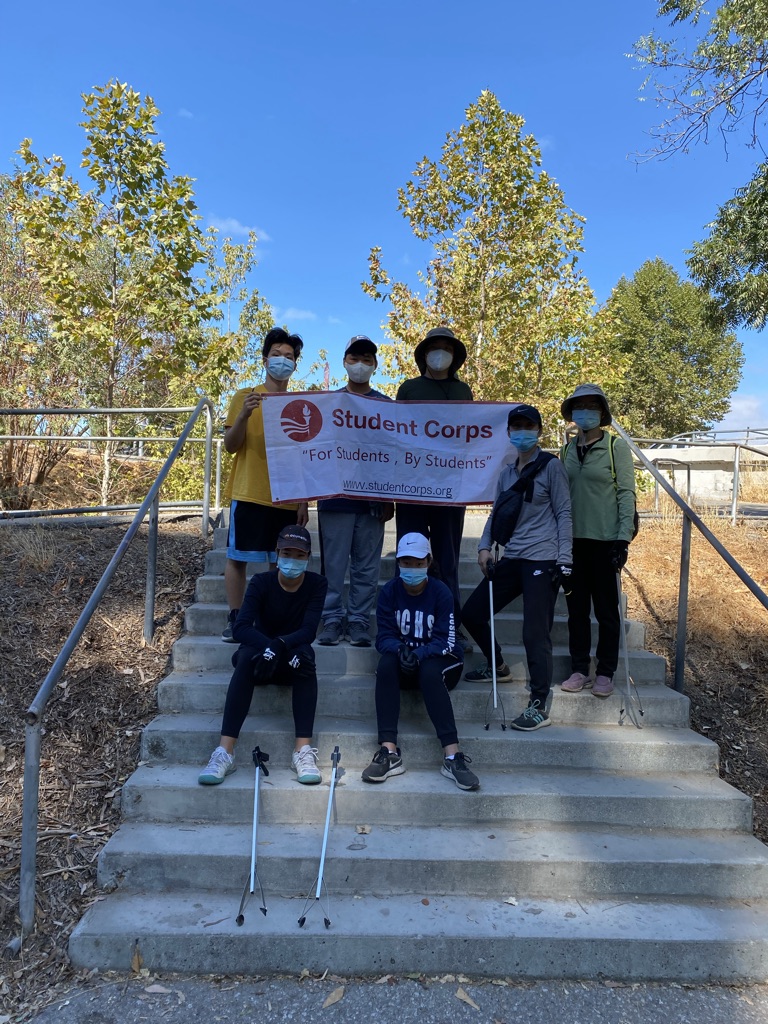 Members of the Student Corps Fremont Chapter met at an intersection near Saratoga Creek early on the morning of September 18, 2021. We received a pleasant surprise when we first made our way down the bank of the creek: there was hardly any trash in sight! The group resorted to cleaning up the immediate vicinity at street level, which included a dead-end court and disused commercial plaza. The court was relatively clean, as it sees frequent usage and is fenced off along the sides, where parking is illegal. The only major finds were a drain stuffed full of trash and a shopping cart. The plaza, on the other hand, had obviously been abandoned for some time, with worn-out pavement, fading paint, a few boarded-up windows, broken lamps, and weeds everywhere. Trash of all sorts had accumulated on its western edge, which borders the creek, including three shopping carts. A row of abandoned cars, mostly leaking white late-model Toyota Corollas, dominated the southern side of the plaza, which was also overgrown with weeds. However, little trash was to be found there. On the sides bordering roads, we found much more trash due to their more accessible locations for littering. Some interesting finds included a newly-opened bag of one hundred golf tees, found in an in-ground electrical box, and a disused newspaper box. At the end of the morning, we had accumulated some five hundred pounds of trash and made a fantastic impact.

Most of the trash pieces Evergreen chapter members collected were shattered or full glass bottles, which likely comprised more than half of the weight of trash we’d collected. There were quite a few bottle-caps to accompany the bottles, along with countless cigarette butts. The trails were mostly clear of garbage; in fact, we had to hunt for most of the trash on the sidelines: through spiky brambles, where we found plastic bottles covered in dirt that had likely been untouched for years, glass bottles buried into the ground, and smashed cans that were covered with more dirt than anything else. Although we did notice a sign that urged people to “throw [your] litter in the littering can,” there were hardly any around. This contributed to the excessive litter. Putting up trash cans would definitely help keep the park more clean. Although we were only supposed to remove trash, we still couldn’t help but notice the beauty of the park. It was inspiring to be in such a place and made the hard work of cleaning up seem like a pleasure. We felt incredibly honored to contribute, even just a little, to many people’s happy places.

With over 200 public parks in San Jose, maintenance is a complex but necessary task. However, during the pandemic, the number of available park employees has decreased, and many parks have been left unmaintained. The help of proactive volunteers is more valuable than ever to ensure that the parks in our community are safe and well-kept. Members of the Valley Christian High School chapter recognized this and have sprung to action as of late. 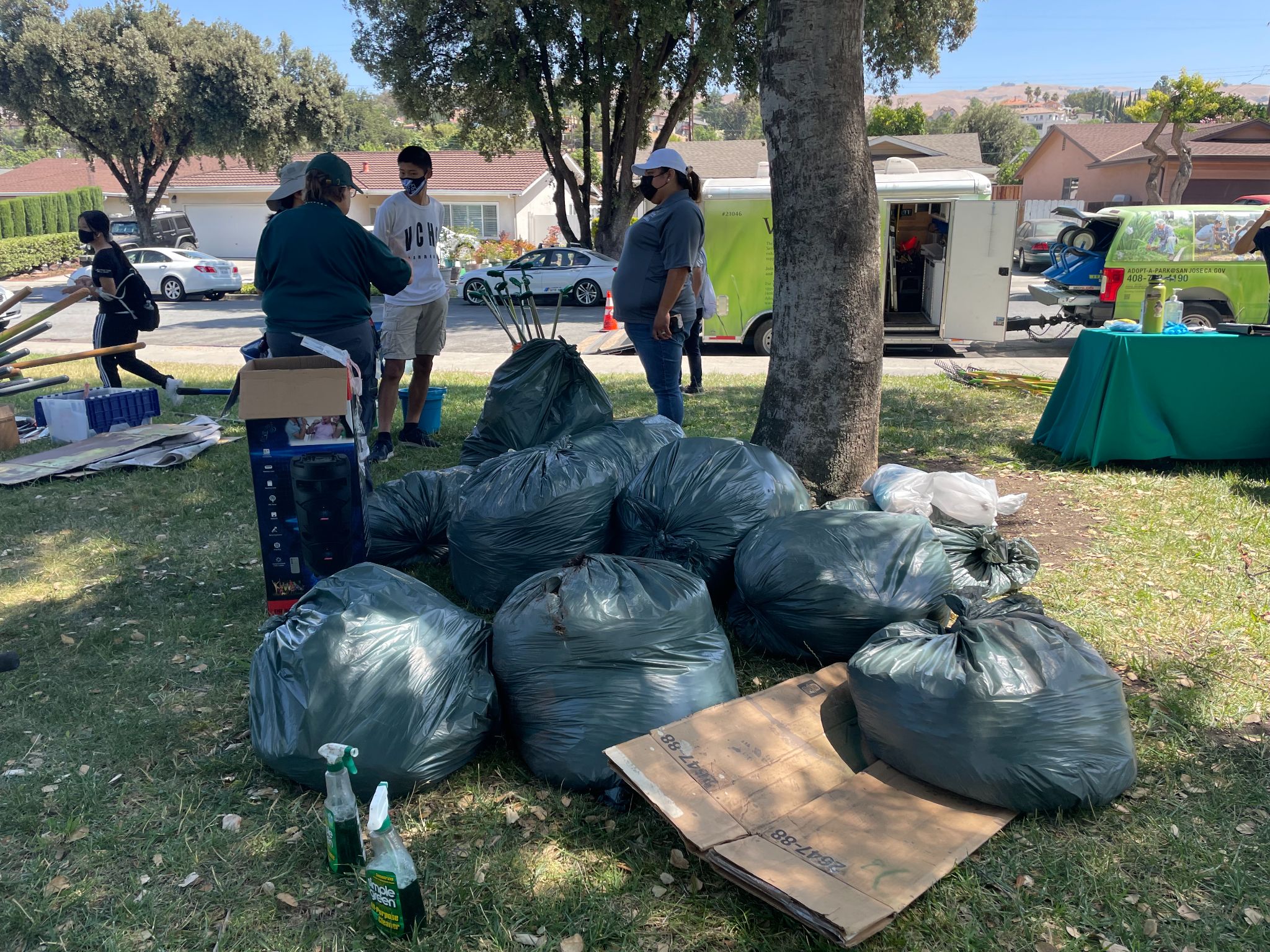 Over 20 Student Corps members of Valley Christian High School and their parents gathered to clean up Mount Pleasant Park on this Saturday. After being left alone for months, the park was clearly in need of maintenance. The grass was littered with all sorts of trash, weeds were overgrown, and the playground’s mulch needed a change. Luckily, we volunteers were eager to help. For three hours, we worked tirelessly to transform the park. We picked up all of the trash, repainted the benches and tables, replaced the mulch, and pulled weeds. Through these various tasks, we were able to restore the park to its former glory. Now, the neighborhood can enjoy the newly restored Mount Pleasant Park!

On a beautiful Saturday with clear skies and a shining sun, various Student Corps members from different branches descended on the trail and creek near Tully Ballfields, which was filled with all types of trash, from shopping carts to shattered glass bottles. For 3 hours, we busied ourselves with shoveling all of the litter into our bags and carrying larger pieces of garbage up to the pickup site. In the end, we managed to remove 3680 pounds of trash, giving everyone a profound sense of accomplishment. There’s still plenty of work to be done, though, so let’s continue to make our community cleaner! 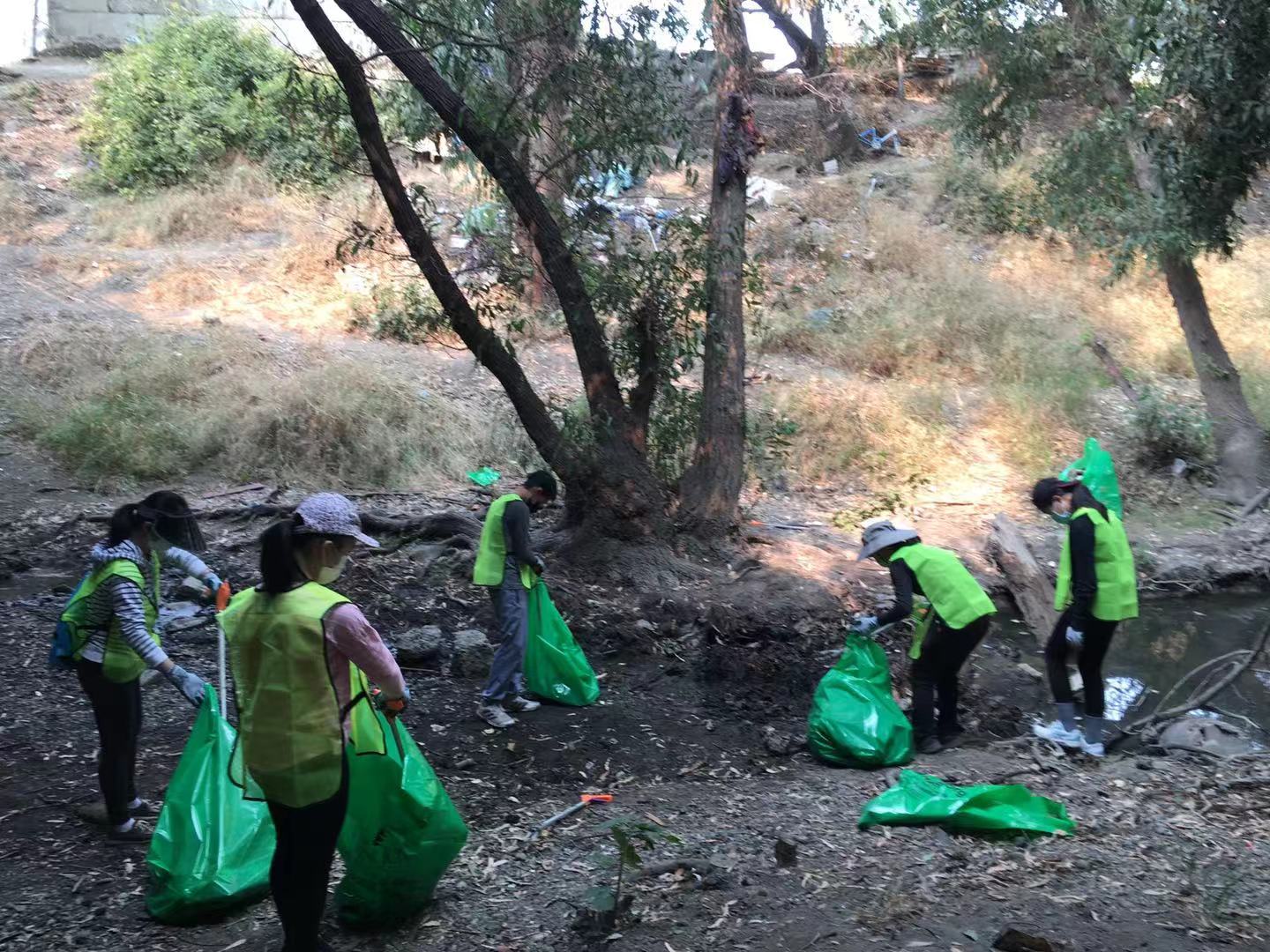 On August 14th, 2021, Student Corps members from three different schools (Valley Christian, Archbishop Mitty, and Evergreen Valley) united to clean up the Almaden Winery Rose Garden. The garden is in the heart of a neighborhood, and people often come to enjoy the beautiful roses. We worked together to deadhead flowers and trim bushes. We also removed moss and leaves to create a cleaner space for the roses to grow and visitors to walk through. By the end of our work, the rose bushes looked well-kept, the pathways were clean, and the soil was clear of unwanted plants. Of course, we were only able to complete all the tasks thanks to our group mindset! This volunteering event was the perfect opportunity to give back to the community, all while fostering social connections and building a network of motivation. We were also joined by Matt Mahan, the city council member representing San Jose’s District 10. He encouraged us to continue to serve the community and explore more community service projects. We appreciate his support and hope to connect with him and the city council again in the future! 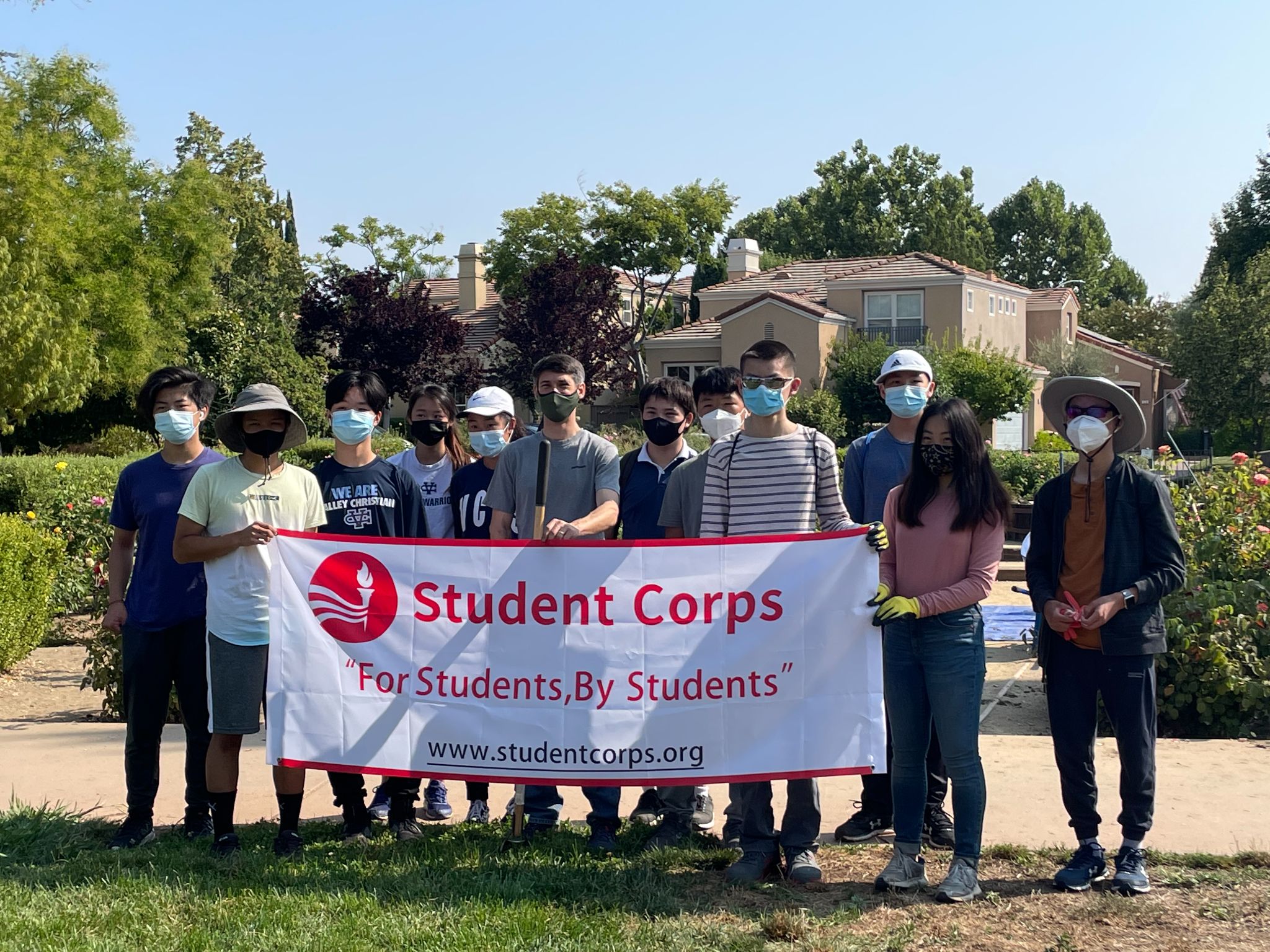 The Food Bank of Contra Costa & Solano has experienced a 50% increase in food needs through the ongoing pandemic, serving 270,000 people a month instead of the usual 178,000. Nonetheless, the Food Bank has never failed to disappoint as they took on the pandemic with an expanded warehouse (over 100k sq feet!), increased advocation on food insecurities, and volunteers like you and me to help the community. With the food bank’s outstanding efforts, it was clear to the Tri-Valley Chapter of NorCal that this food bank deserved all the help it could get. Especially since they support over 240 nonprofits, they not only help out their neighbors but also their local charities!

On June 16, 2021, seven members of the Tri-Valley chapter arrived at the food bank and went right to work. Within the warehouse were pallets stacked high with all kinds of canned goods such as corn, beans, and tomato sauce. These canned goods were all wrapped in large amounts of plastic wrap, so our job was to cut away all the plastic and transfer the food to an empty wooden pallet. In addition, with our donation to the food bank of $500, we will have provided an additional 1000 healthy meals to people in need! The food bank is a multi-level process with many moving parts, and we were able to contribute to something that helps hundreds of more people!